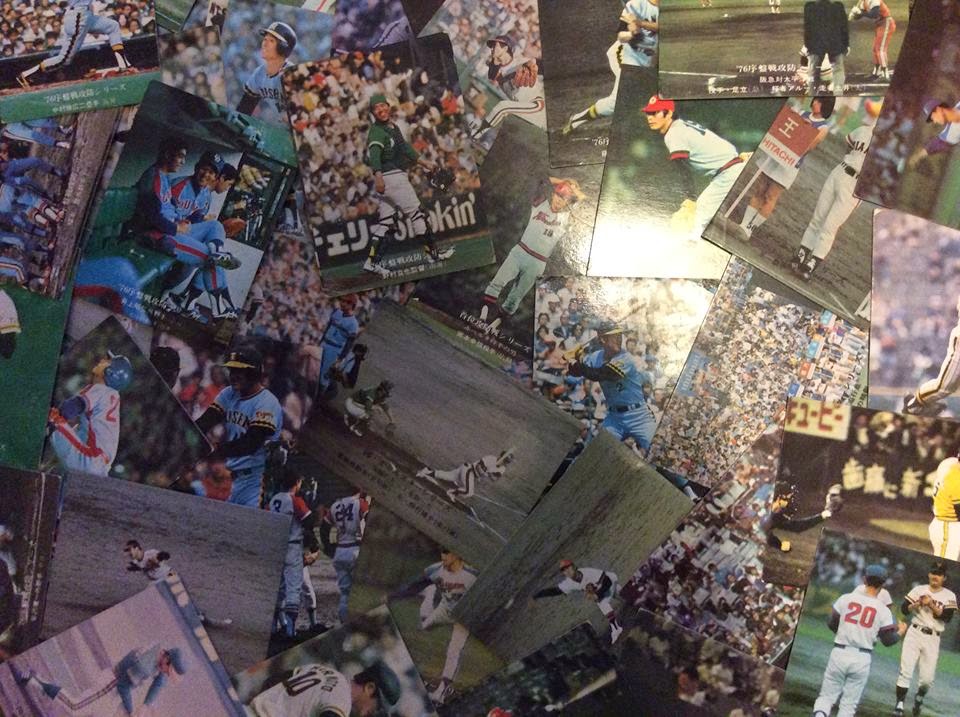 The first time I ever visited a baseball card store in Japan was in 2002.  It was a shop in Himeji which has long since gone out of business.  I didn`t know much about Japanese cards at the time and I remember going over to have a peak in the glass case where they had all their valuable single cards on display.  In addition to the usual suspects – 1993 BBM Ichiro and the like – they had a fair number of older Calbee cards from the 1970s of players like Nagashima and Oh in there.  It was the first time I had ever seen older Japanese cards.  In my eye the thing that set them apart the most from contemporary cards wasn`t their smaller size or the lack of glossy foil borders.  It was the use of kanji on the fronts of the cards to indicate the player`s name and team.

This I found to be immensely appealing.  This was something that no American card ever had.  It harkened back to a pre-globalization era when countries actually mattered and products were designed for local tastes rather than for generic international markets.  The kanji on the fronts of the cards just screamed “These are Japanese cards intended for Japanese people who happen to like baseball. Nothing more, nothing less.”

I long wondered why Japanese card companies abandoned that practice and started using the Roman alphabet to display information on the front of the card.  Today pretty much all sets with a few exceptions like the odd Calbee Star Card subset don’t have kanji anywhere on the front of the card (the card backs, of course, are still written in Japanese).  If we look back at the development of cards year by year, it is easy to spot an exact point at which this transition happened – 1990.  The 1990 Calbee set started pretty much like any other that had preceded it – the first series was mini-card sized and featured the names on the front written in Japanese.  Then suddenly BLAMMO!  Series 2 comes out and not only are the cards much bigger in size, but the player names are now displayed in alphabetical form on the front.  A few months later the 1991 BBM set was released, also with alphabetized names on the front, and kanji card fronts basically died out.

If you haven’t read this excellent post on Japanese Baseball Cards about Larry Fuhrmann and the development of that first BBM set, I highly recommend doing so. In part I suggest it because it is an engaging and thoroughly well-researched article, but I also do so because it sheds some light on this very question that I have long grappled with.  Apparently the idea of using the Roman alphabet originated with Furhmann, who suggested that Calbee put player names in roman letters on the backs of the 1989 Calbee cards as a way of making the cards appeal not only to Japanese collectors but also to American ones.  His relationship with Calbee ultimately went sour, but the timing of the radical changes to the design of Calbee cards which occurred midway through the 1990 run, which seemed to presage many of the features of the 1991 BBM set that Fuhrmann had a big role in creating (larger cards, alphabetized names on front) seem likely to have been a result of his contact with Calbee (though the article does not explicitly state this).

Aside from this rather intriguing question, I find the abandonment of kanji on Japanese cards to be a bit of a lamentable development even when viewed from the standpoint of a foreign collector.  From a functional point of view, it is fair to say, having the names in alphabetical form makes them much more accessible and easy to read.  Kanji are hard to learn, especially those used in first names, which are often quite obscure.   From an aesthetic point of view, though, removing kanji from the fronts of Japanese baseball cards really robs them of their most appealing quality when seen through foreign eyes: their exotic nature. The kanji tell us something in addition to just the player`s name – they tell us that NPB isn’t just an independent minor league. Rather it is the Japanese league which is embedded within a completely different culture that uses a completely different form of writing to express itself.  Hey, isn’t that neat?  It kind of has the same appeal that the Dude’s T-shirt of Kaoru Betto in the Big Lebowski does: 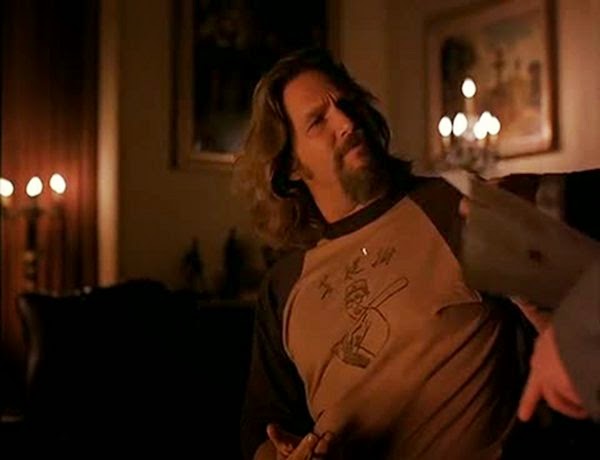 That t-shirt would have been way less cool without those kanji.

Its not just the aesthetics though. Collecting cards where all the information is written in another language adds another challenge to collecting, which is kind of unique.  It forces the collector to actually learn something about the cards which they don`t have to with American cards - how to read basic stuff.  I have learned a lot of baseball related kanji, including a lot of player names, from having to read the info on their cards.  Having the basic stuff written in English feels like its adding a shortcut - dumbing down the challenge and enjoyment of collecting Japanese cards.It just sort of feels....wrong to me for some reason.

Post 1990 cards just don`t have the same kind of appeal that earlier ones do and I think a lot of that is attributable to this change.  They are incapable of impressing the way those 1970s Calbees did to me back in 2002.    They look just a bit blander and a bit too generic without those lovely kanji on them.
Posted by Sean at 2:39 AM