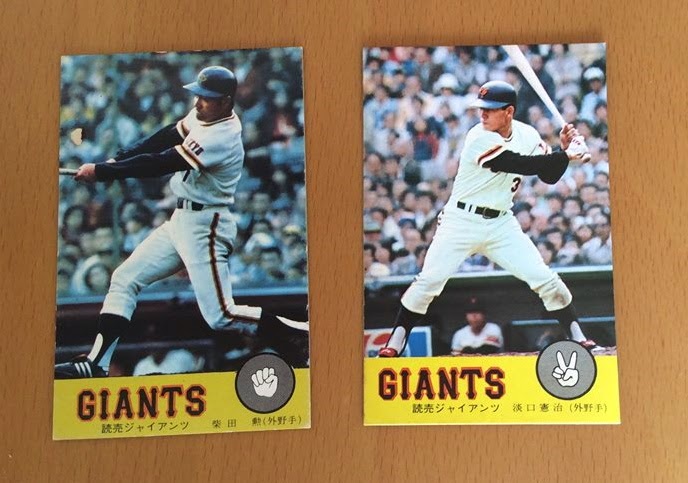 I picked up a couple of new cards for the collection this week, Nippon Ham Sausage cards of Isao Shibata and Kenji Awaguchi. According to Rob Fitts these were released in 1975 with...well, sausages I guess.

I have been trying to find some cards from this set for the longest time, mainly because I love the design on them, it kind of reminds me of the 1963 Topps set only better.  The color border on the bottom with the team name looks pretty cool, as does the full bleed photos on the top. The backs are pretty mundane but about par for the course for a Japanese set from the 1970s. 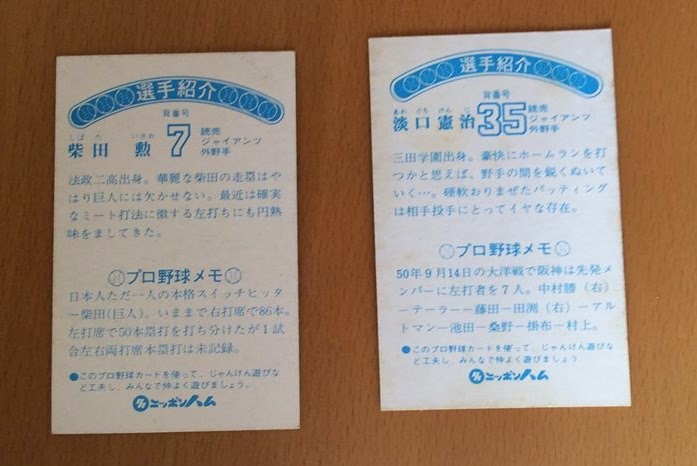 One problem in collecting these is that they are extremely difficult to find, even in Japan.  There are only about half a dozen singles available on Yahoo Auctions at the moment (compared to thousands of BBM and Calbee cards).  I`m guessing they almost never turn up on Ebay. I lucked out on these two, one seller had an auction with about 10 of them and I put bids in on most.  I lost some of them by a wide margin but these two for some reason only attracted moderate interest and I was able to score them for only a few bucks each, which is surprising since they are both in really nice shape (exmt-nrmt or so).

Nippon Ham is, of course, the owner of the Nippon Ham Fighters so this set was actually put out by a company which owns an NPB team, an interesting conflict of interest.  I haven`t seen a checklist so I`m not sure if there are more Fighters cards than those of other teams or if they went the Calbee route and drowned the selection in Giants players (the fact that my randomly acquired cards are both of Giants players suggests this might be the case).  Another interesting question arises from the fact that these cards were released just a couple of years after Nippon Ham purchased the Fighters (previously the Nittaku Flyers).  I wonder if there was some sort of connection there?  Seems logical, perhaps there were some baseball fans on Nippon Ham`s Board of Directors back in the 1970s.

Anyway, I love these cards and will be keeping my eyes peeled for more....