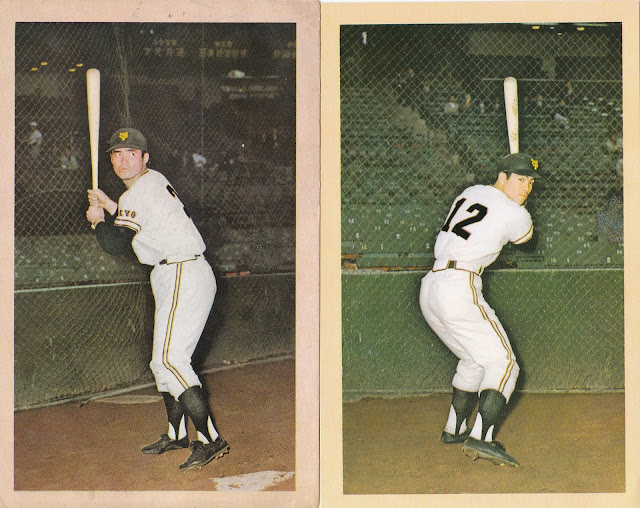 Fortunately my recent decision to put a 1000 Yen cap on my baseball card purchases has not actually prevented me from buying stuff.  Yesterday's mail included two cards from the 1964 Morinaga Top Star set which, it seems, I have decided to try to complete.

Its a 12 card set and I already had two of them, so now I'm up to four!  These set me back 500 Yen each, so combined they just squeaked under my self-imposed spending limit!

And the card on the left is Shigeo Nagashima , an A-list Hall of Famer if there ever was one, so it was a good purchase even though both are in a bit lower condition than my previous two.  The one on the right is Isao Shibata. 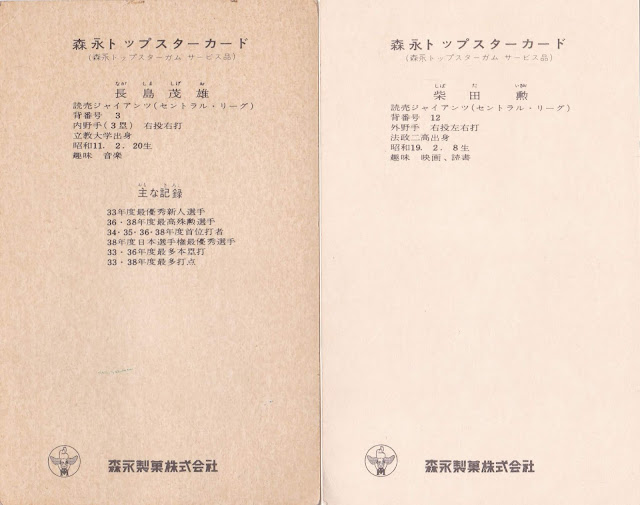 One odd thing I noticed is that the cards are slightly different color, the Nagashima card is a lot darker than the Shibata.  This is noticable on the border on the card fronts and especially on the card backs.  This isn't the result of anything getting spilled on the Nagashima, I think they've just aged differently.

A much weirder and spookier thing I noticed is that if you look in the background of the Shibata card, there seems to be a ghost sitting in the stands: 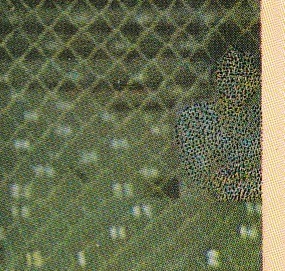 I'm pretty sure this was an actual person sitting there which for some reason Morinaga decided to obscure.  They chose a very odd way of doing so, the dots they use really do make it look like a ghostly apparition, or some sort of alien super hero.

The Nagashima card also has a couple of spots that look like this, but its not as pronounced. I'm going to give my other Morinagas a check to see if they have ghosts too.

While the addition of Nagashima to the cards of Sadaharu Oh and Katsuya Nomura which I already had gives me most of the key stars in the set, according to Engel there are two short printed cards (Shigeru Mizuhara and Yasumitsu Toyoda) which are way harder to find than the rest and way more expensive (like 300$ expensive).  So for the time being I might satisfy myself with trying to complete the 10 cards of the set that weren't short printed!